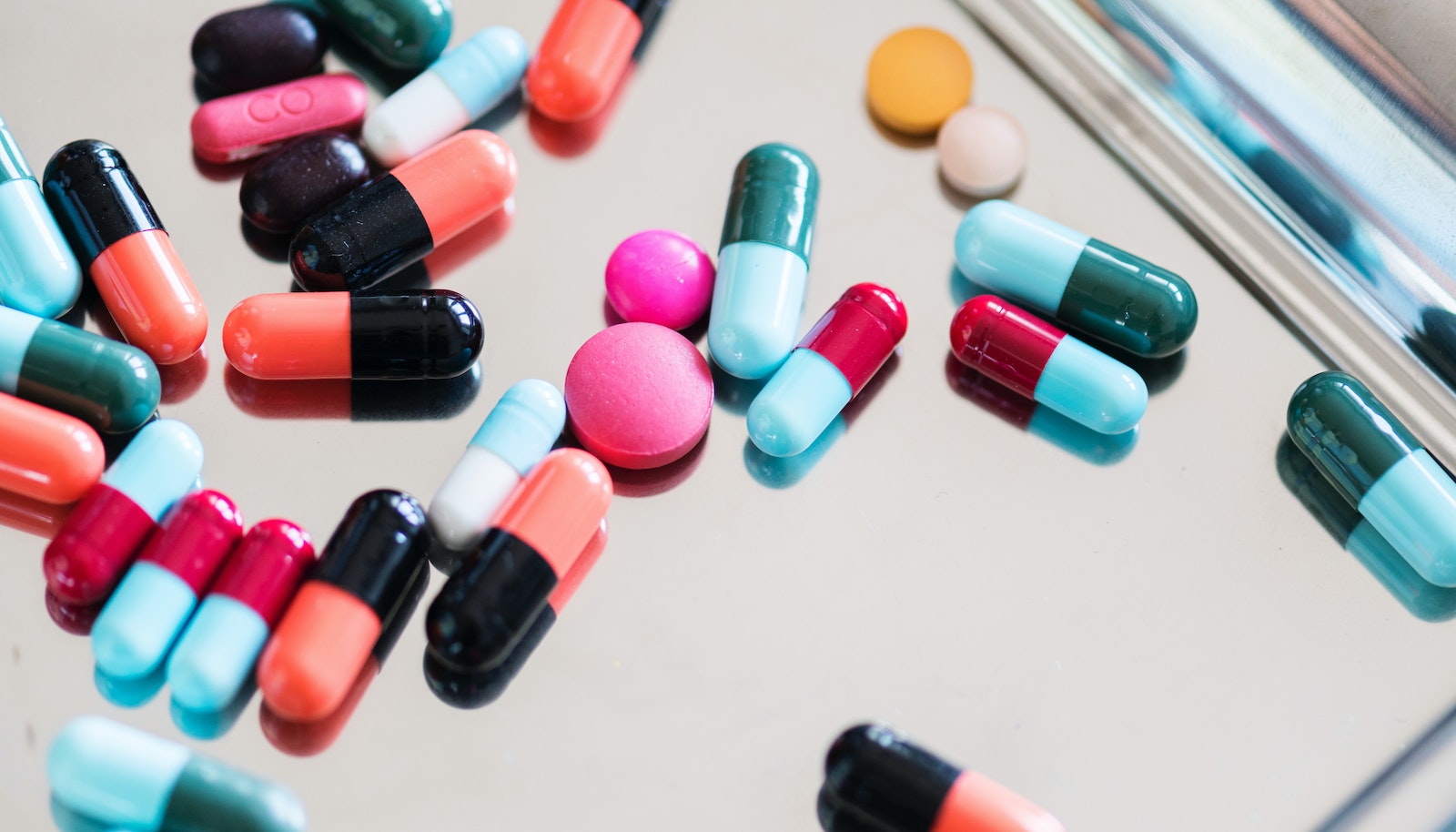 2018 was a busy one for the US Food and Drug Administration. Drug approvals hit a record high, with 59 novel drugs securing the agency’s permission to head to market. This included a number of drugs with modes of action that transcend the two main classes of drugs.

In 2018, the US Food and Drug Administration (FDA) set an all-time record for new drug approvals with 59 novel drugs and biologics securing the agency’s permission to head to market. Small molecules continue to account for the majority of new drugs, at 64% of therapies approved. Antibodies represented a further 20% of approvals. However, the remaining new drugs (15%) fall outside the scope of these two main modalities, reflecting the increasingly diverse approaches being used to tackle diseases, particularly rare diseases.

Diseases often arise out of complex networks of biological interactions that need to be understood not only at a clinical level, but also at phenotypic and molecular levels. Consequently, an important aspect of developing a new treatment for a disease is choosing the best method of intervention, importantly the type of drug to be administered. To date, active substances used as drugs can be divided into two classes – small and large molecules. They differ not only in terms of size, but also in how they are made, how they behave and their mode of action in the body.

Classic drug development works with small, chemically manufactured molecules and still make up over 90 percent of the drugs on the market today. These small molecules can be formulated into easily ingestible tablets or capsules. If the tablet dissolves in the GI tract, the dissolved active substance is absorbed into the bloodstream via the intestinal wall. From there, the small molecules can reach almost any desired destination in the body because of their tiny size. Their small structure and chemical composition often also help them to easily penetrate cell membranes.

By contrast, large molecules (also known as biologics) are therapeutic proteins, essentially copies or optimized versions of endogenous human proteins. Biological drugs may exhibit lower stability and a greater sensitivity to enzymatic degradation, making oral delivery problematic. Thus, the majority of biologics are currently administered through subcutaneous/intramuscular injection or via intravenous infusion for larger volumes. Biologics bind to specific cell receptors that are associated with the disease process. For instance, monoclonal antibodies can be engineered to recognise receptors on the surface of cancer cells to orchestrate their destruction. Biologics are often employed to antagonise large signalling molecules (e.g. Humira binding to TNFa for the treatment of arthritic diseases) or disrupt protein-protein interactions involving a large interface. Whilst the large size of biologics is key to their therapeutic capability, the difficulty of bringing these proteins into cells limits the scope of applications. As such their use remains mainly limited to extracellular targets.

Inhibition of protein synthesis is an event-driven strategy whereby drugs reduce cellular levels of target proteins by disrupting the translational machinery. Many of these approaches are nucleotide-based, for example small interfering RNA (siRNA), antisense oligonucleotides or genome editing strategies such as CRISPR-Cas9. One of the highlights of 2018 was the approval of two nucleotide-based drugs for treatment of the polyneuropathy of hereditary transthyretin-mediated amyloidosis. This rare, progressive, life-threatening disease is caused by mutations in the TTR gene encoding transthyretin (TTR) leading to synthesis of a defective transthyretin protein. The faulty protein then folds up to form amyloid which accumulates in various parts of the body to cause nerve and tissue damage.

Onpattro (Patisiran) is the first approved drug that acts by RNA interference (RNAi), an endogenous cellular mechanism for controlling gene expression. Onpattro uses short, double-stranded nucleotides to intercept transthyretin messenger RNA (mRNA) before it can be translated. This results in the cleavage of target mRNA by small interfering RNAs bound to the RNA-induced silencing complex (RISC).

The other drug approval was Tegsedi (Inotersen), an antisense oligonucleotide inhibitor of mutant and wild-type human transthyretin synthesis. Tegsedi was designed to bind to the 3’-untranslated region of human TTR mRNA, which promotes RNase H1-mediated cleavage of the mRNA. This prevents production of transthyretin protein.

Alternative event-driven strategies induce protein degradation whereby drug binding triggers the tagging of the disease-implicated protein for degradation. Induced protein degradation is not a recent concept. Inhibitors of the molecular chaperone Heat Shock Protein 90, which stabilizes or helps other proteins acquire their functionally active conformation, first entered clinical trials in 1999, yet none have gained FDA-approval. However, the lessons learned from the first-generation inhibitors informed strategies to develop second-generation drugs acting via this novel modality.

For example, emerging technologies based on proteolysis-targeting chimeras (PROTACs) that exploit cellular machinery to selectively degrade target proteins are attracting considerable attention in the pharmaceutical industry owing to the advantages they could offer over traditional small-molecule strategies. PROTACs are heterobifunctional molecules comprising two ligands; one for E3 ligase recruitment and a second one for target-binding. Formation of a ternary complex between the PROTAC, the ligase and the target triggers target ubiquitination and flagging it for proteasomal degradation. A key feature of PROTACs is their catalytic mode of action. They dissociate following ubiquitination and rebind to new target proteins, which allows their use at sub-stoichiometric concentrations. PROTACs represent an exciting new modality, repurposing small molecule drugs to selectively degrade, rather than simply inhibit, disease-causing proteins. 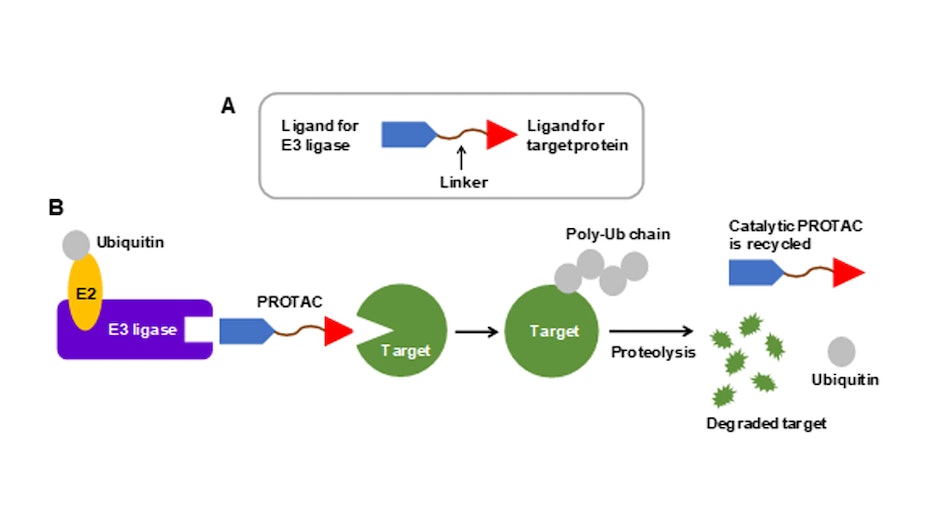 (A) PROTACs are bifunctional molecules comprising a targeting ligand joined to an E3 ligase-recruiting moiety through a short linker. (B) Upon simultaneous binding of the target protein and an E3 ubiquitin ligase, the target protein becomes polyubiquitinated and is subsequently degraded by the proteasome.

Recently, an advanced PROTAC technology was developed, namely CLIPTACs (in-cell click-formed proteolysis-targeting chimeras). This approach uses two cell permeable low molecular weight precursors which undergo a cycloaddition reaction in the cell to form a functional CLIPTAC. This technology has the advantage of guaranteeing cell permeability which can be much harder to achieve when using the PROTAC approach. Many major pharmaceutical companies have efforts in the space, so hopefully targeted protein degradation will become one of the successful new modalities that advance over the next decade.

Cures for all diseases remain in the future, and consequently the drive for innovation in the drug discovery process continues at pace. Small molecules and biologics will likely lead the charge given their maturity, with biologic drugs predicted to enter therapy areas which have seen little biologic use, such as Alzheimer’s, asthma and cardiovascular. However, the utilisation of emerging new modes of drug action is also destined to play a significant role, especially given a supportive FDA approval process. 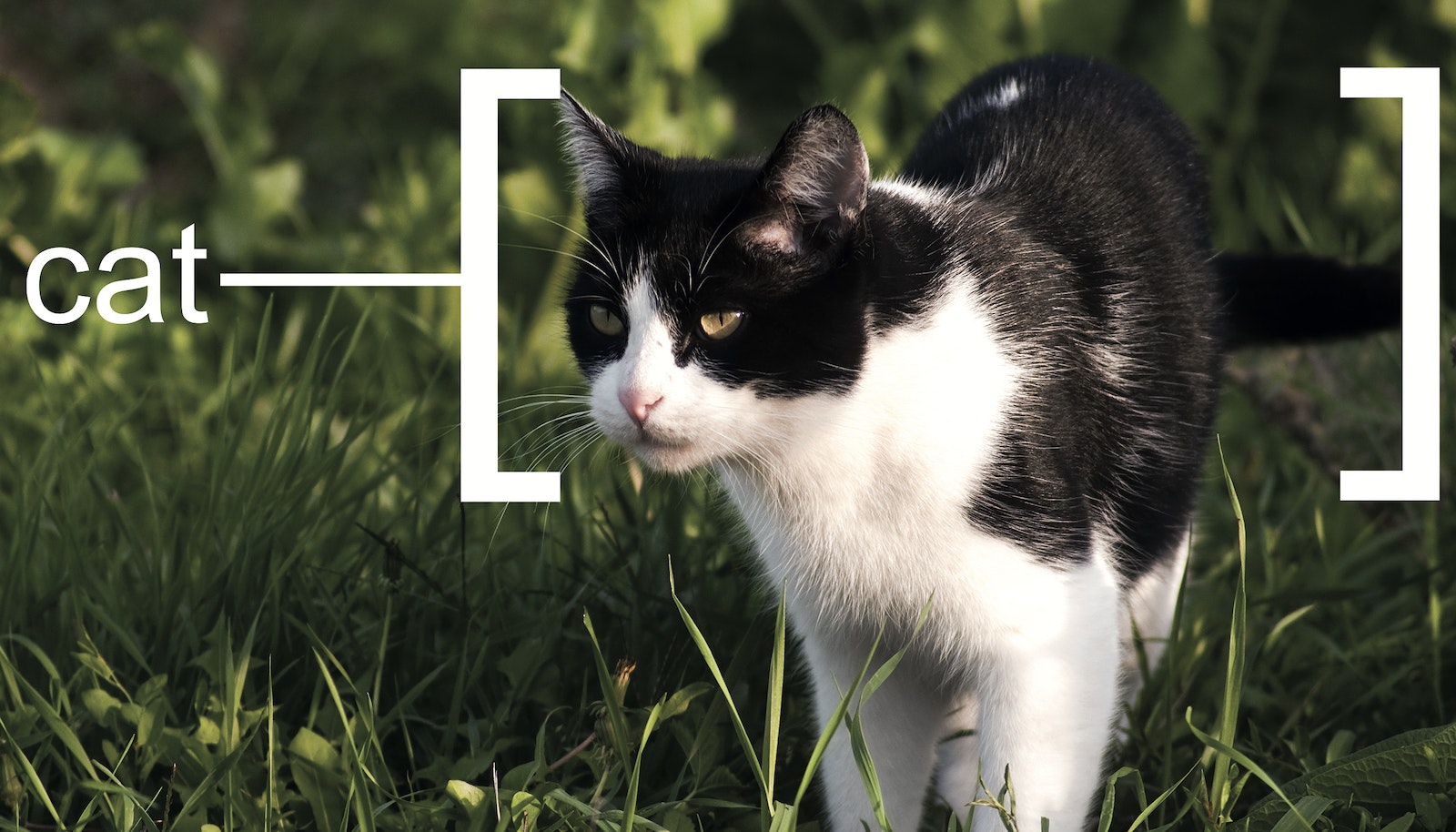