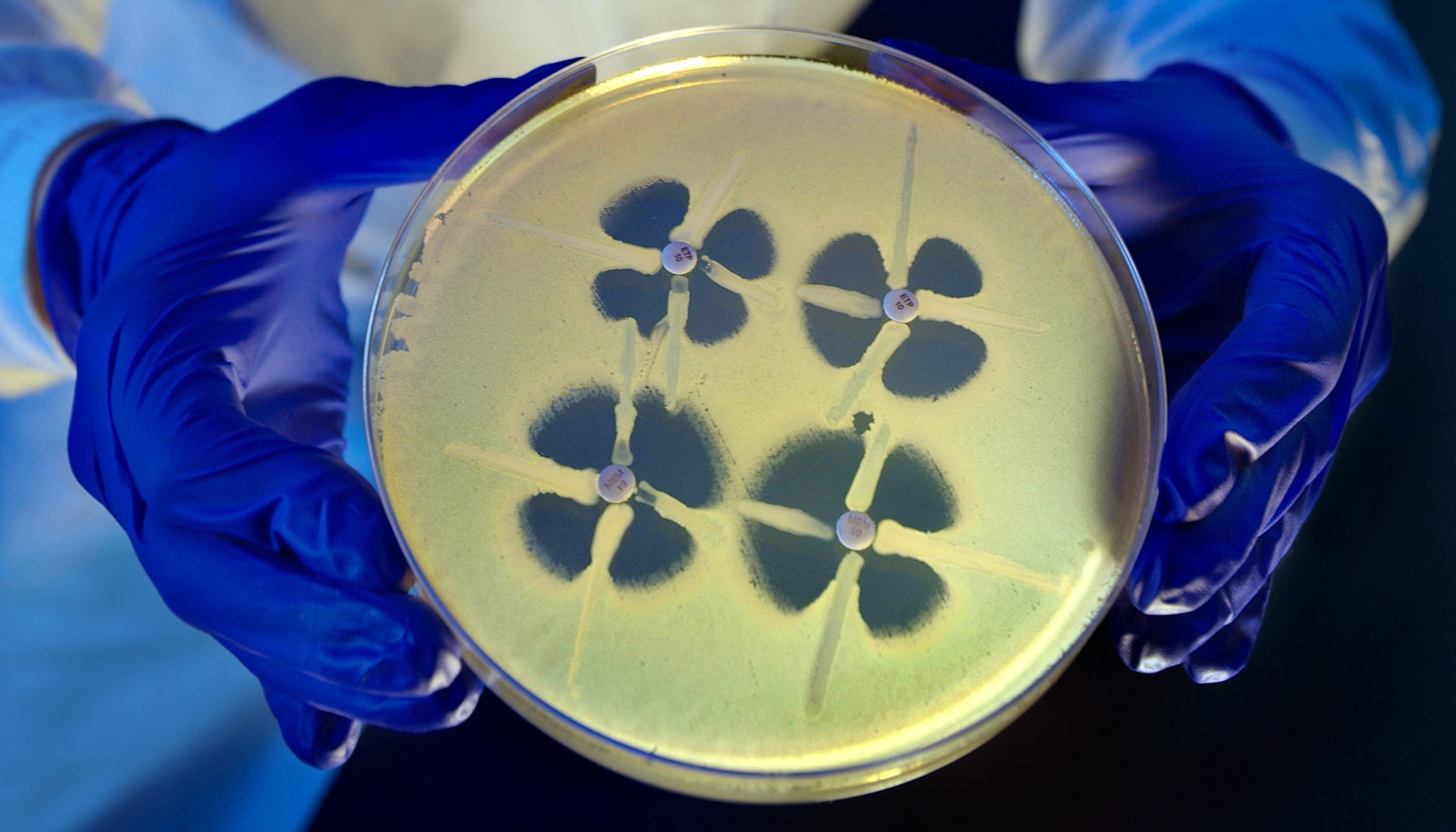 Antimicrobial susceptibility testing at the point of care could slow the spread of antimicrobial resistance, but only creative technology development and regulatory equivalence data will unlock this prize. 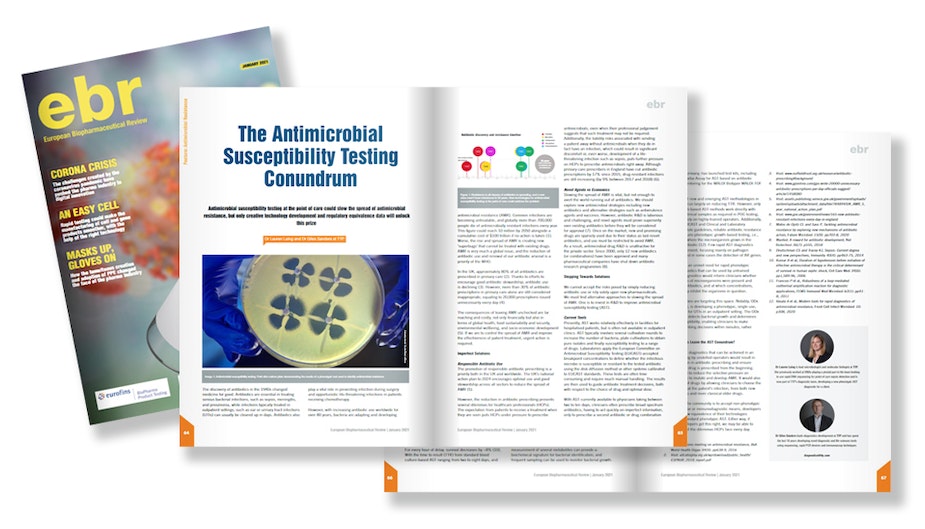 The discovery of antibiotics in the 1940s changed medicine for good. Antibiotics are essential in treating serious bacterial infections, such as sepsis, meningitis, and pneumonia, while infections typically treated in outpatient settings, such as ear or urinary tract infections (UTIs) can usually be cleared up in days. Antibiotics also play a vital role in preventing infection during surgery and opportunistic life-threatening infections in patients receiving chemotherapy.

However, with increasing antibiotic use worldwide for over 80 years, bacteria are adapting and developing antimicrobial resistance (AMR). Common infections are becoming untreatable, and globally more than 700,000 people die of antimicrobially resistant infections every year. This figure could reach 10 million by 2050 alongside a cumulative cost of $100 trillion if no action is taken (1). Worse, the rise and spread of AMR is creating new ‘superbugs’ that cannot be treated with existing drugs. AMR is very much a global issue, and the reduction of antibiotic use and renewal of our antibiotic arsenal is a priority of the WHO.

The consequences of leaving AMR unchecked are far reaching and costly, not only financially but also in terms of global health, food sustainability and security, environmental wellbeing, and socio-economic development (5). If we are to control the spread of AMR and improve the effectiveness of patient treatment, urgent action is required. 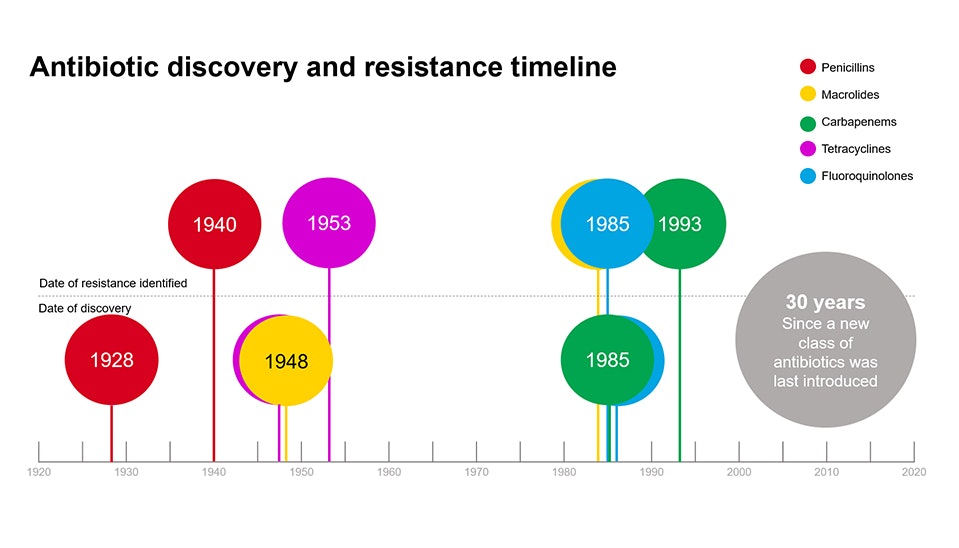 Resistance to all classes of antibiotics is spreading, and a new class hasn’t been introduced in 30 years.

The promotion of responsible antibiotic prescribing is a priority both in the UK and worldwide. The UK’s national action plan to 2024 encourages optimal use and good stewardship across all sectors to reduce the spread of AMR (5).

However, the reduction in antibiotic prescribing presents several dilemmas for healthcare professionals (HCPs). The expectation from patients to receive a treatment when they are seen puts HCPs under pressure to prescribe antimicrobials, even when their professional judgement suggests that such treatment may not be required. Additionally, the liability risks associated with sending a patient away without antimicrobials when they do in fact have an infection, which could result in significant discomfort or, even worse, development of a life-threatening infection such as sepsis, puts further pressure on HCPs to prescribe antimicrobials right away. Although primary care prescribers in England have cut antibiotic prescriptions by 17% since 2015, drug-resistant infections are still increasing (by 9% between 2017 and 2018) (6).

Slowing the spread of AMR is vital, but not enough to avert the world running out of antibiotics. We should explore new antimicrobial strategies including new antibiotics and alternative strategies such as antivirulence agents and vaccines. However, antibiotic R&D is laborious and challenging, and novel agents must prove superiority over existing antibiotics before they will be considered for approval (7). Once on the market, new and promising drugs are sparsely used due to their status as last-resort antibiotics, and use must be restricted to avoid AMR.

As a result, antimicrobial drug R&D is unattractive for the private sector. Since 2000, only 12 new antibiotics (or combinations) have been approved and many pharmaceutical companies have shut down antibiotic research programmes (8).

We cannot accept the risks posed by simply reducing antibiotic use or rely solely upon new pharmaceuticals. We must find alternative approaches to slowing the spread of AMR. One is to invest in R&D to improve antimicrobial susceptibility testing (AST).

Presently, AST works relatively effectively in facilities for hospitalised patients, but is often not available in outpatient clinics. AST typically involves several cultivation rounds to increase the number of bacteria, plate cultivations to obtain pure isolates and finally susceptibility testing to a range of drugs. Laboratories apply the European Committee on Antimicrobial Susceptibility Testing (EUCAST) accepted breakpoint concentrations to define whether the infectious microbe is susceptible or resistant to the tested antibiotic using the disk diffusion method or other systems calibrated to EUCAST standards. These tests are often time consuming and require much manual handling. The results are then used to guide antibiotic treatment decisions, both with respect to the choice of drug and optimal dose.

With AST currently available to physicians taking between two to ten days, clinicians often prescribe broad spectrum antibiotics, having to act quickly on imperfect information, only to prescribe a second antibiotic or drug combination when AST results are available. This means that patients frequently take an inappropriate drug, which puts selective pressure on microbes to evolve AMR, and correct treatment is delayed.

Where do we want to go?

What if AST results were available at the point of care (POC), within the duration of an outpatient’s visit?

Clinicians could prescribe the right antibiotic the first time the patient presents at a healthcare facility. In outpatient settings, it would be possible to reduce the misuse of antibiotics and thereby the spread of AMR. In emergency settings, survival rates for life-threatening conditions such as sepsis would be dramatically improved. Access to fast, robust, and cheap POC AST diagnostics would be a paradigm shift from empirical treatment of infections, leading to substantial savings via reduced hospital days, disability days, and lives saved.

Molecular or genotypic AST diagnostics are tests based on detection and/or amplification of RNA or DNA. These effective direct methods eliminate bacterial culture, long incubations, contamination risks, and the spreading of deadly infections. Yet, despite the promise of speed, sensitivity, and amenability to small cartridge-based POC testing, few molecular AST methods have acquired FDA approval.

One of the main reasons is because non-phenotypic methods are not always seen to be reliable. From genotypic information, it may be unclear whether the detected microbe is pathogenic or commensal. Additionally, the detection of specific androgen receptor (AR) genes cannot give undisputable proof of antibiotic resistance, and the data do not point to which antibiotic the physician should prescribe.

However, for certain infections, classical phenotypic testing simply takes too long, and molecular AST diagnostics, which are not reliant on pathogen isolation and culture, have real potential to save lives.

Sepsis, a life-threatening immune over-reaction to an infection, is the leading cause of death among hospitalised patients in the UK (9). Clinicians must act fast to identify the infection and administer the most effective treatment. For every hour of delay, survival decreases by ~8% (10). With the time to result (TTR) from standard blood culture-based AST ranging from two to eight days, and sometimes longer for fungal infections, physicians have no choice but to apply classical empirical methods to find the most effective treatment. In this scenario, rapid AST would focus the list of potentially effective antimicrobials and significantly increase the expected survival rate for sepsis patients.

An example of a technology in this space is the LidiaSeq semiconductor sequencing instrument under development by DNA Electronics (DNAe), UK. LidiaSeq promises pathogen identification from blood samples in a matter of hours, including the identification of specific AR genes.

T2MR (T2 Biosystems), USA, is an example of an FDA- cleared detection method utilising miniaturised magnetic resonance technology to identify molecular targets directly in blood. With a TTR of two to five hours, these technologies advocate for the potential of molecular AST to revolutionise care in contexts where every hour counts, but also to play its role in managing the AMR crisis.

While such technologies could be incredibly disruptive in hospital settings and would drastically reduce TTR for septicaemia, clinically actionable AST diagnostics in outpatient settings would need to be significantly faster. High-throughput multiplex genotyping could also be achieved via classical quantitative polymerase chain reaction (PCR) or isothermal methods. Techniques such as LAMP are especially robust and less sensitive to inhibitors than standard PCR, allowing for analysis of a broad range of patient samples with minimal processing (11).

Examples of faster molecular AST are starting to emerge. For example, QuantuMDx Ltd, UK, promises a simple-to- use, portable, and battery-operated molecular diagnostic system with TTR of less than 30 minutes. However, there is still room for significant innovation to bring rapid AST diagnostics to the point of care.

A new and emerging approach to rapid AST is via changes in host response. Inflammatix’s, USA, solution ‘HostDx’ uses patient immune biomarkers to identify the type and severity of an acute infection, with TTR of less than 30 minutes. In contrast, ArcDia’s mariPOC technology, Finland, utilises a two-photon excitation method for sensitive and specific direct immuno-pathogen detection.

Bruker Corp, Germany, has launched test kits, including the BT STAR-Carba Assay for AST based on antibiotic degradation monitoring for the MALDI Biotyper MALDI-TOF system.

A broad array of new and emerging AST methodologies in development focus largely on reducing TTR. However, only few rapid growth-based AST methods work directly with polymicrobial clinical samples as required in POC testing, and many still rely on highly-trained operators. Additionally, according to EUCAST and Clinical and Laboratory Standards Institute guidelines, reliable antibiotic resistance diagnostics require phenotypic growth-based testing, i.e., an experiment where the microorganism grows in the presence of antibiotic (12). Few rapid AST diagnostics fulfil this requirement, focusing mainly on pathogen identification and in some cases the detection of AR genes.

There is clearly an unmet need for rapid phenotypic AST POC diagnostics that can be used by untrained users. Such diagnostics would inform clinicians whether significant levels of microorganisms were present and advise which antibiotics, and at which concentrations, would effectively inhibit the organisms in question.

Where does this leave the AST conundrum?

Rapid POC AST diagnostics that can be actioned in an outpatient setting by unskilled operators would result in a huge reduction in antibiotic prescribing and ensure that the correct drug is prescribed from the beginning.

This would help to reduce the selective pressure on microorganisms to mutate and develop AMR. It would also extend the life of drugs by allowing clinicians to choose the right drug to treat the patient’s infection, from both new antibiotic agents and more classical older drugs.

Additionally, if the community is to accept non-phenotypic AST by molecular or immunodiagnostic means, developers will need to show equivalence of their technologies compared to standard phenotypic AST. Either way, if diagnostic developers get this right, we may be able to alleviate some of the dilemmas HCPs face every day. 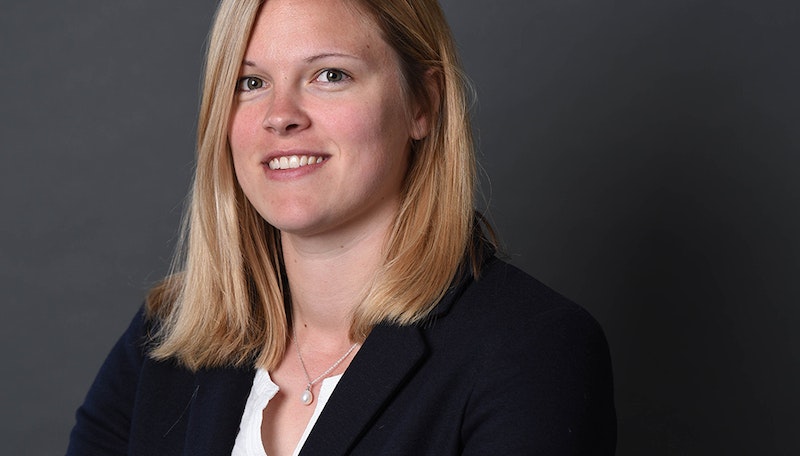 Lead microbiologist and molecular biologist at TTP. She previously worked at DNAe playing a pivotal part in the team looking to use rapid DNA sequencing for point of care sepsis detection and is now part of TTP’s diagnostic team, developing a new phenotypic AST diagnostic for a client. 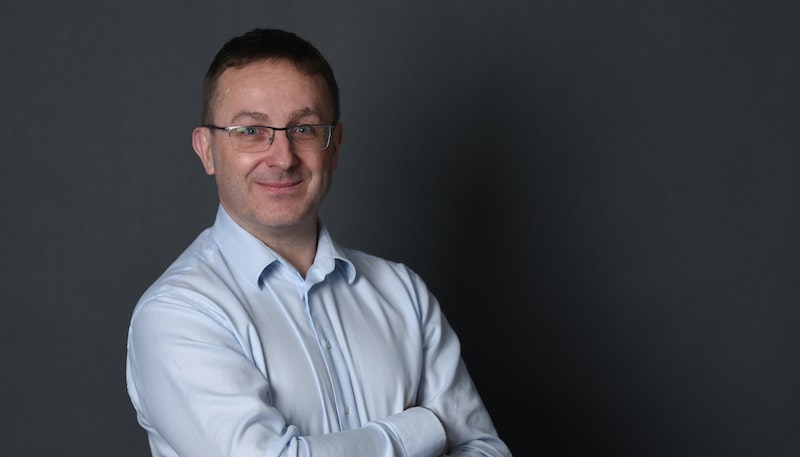 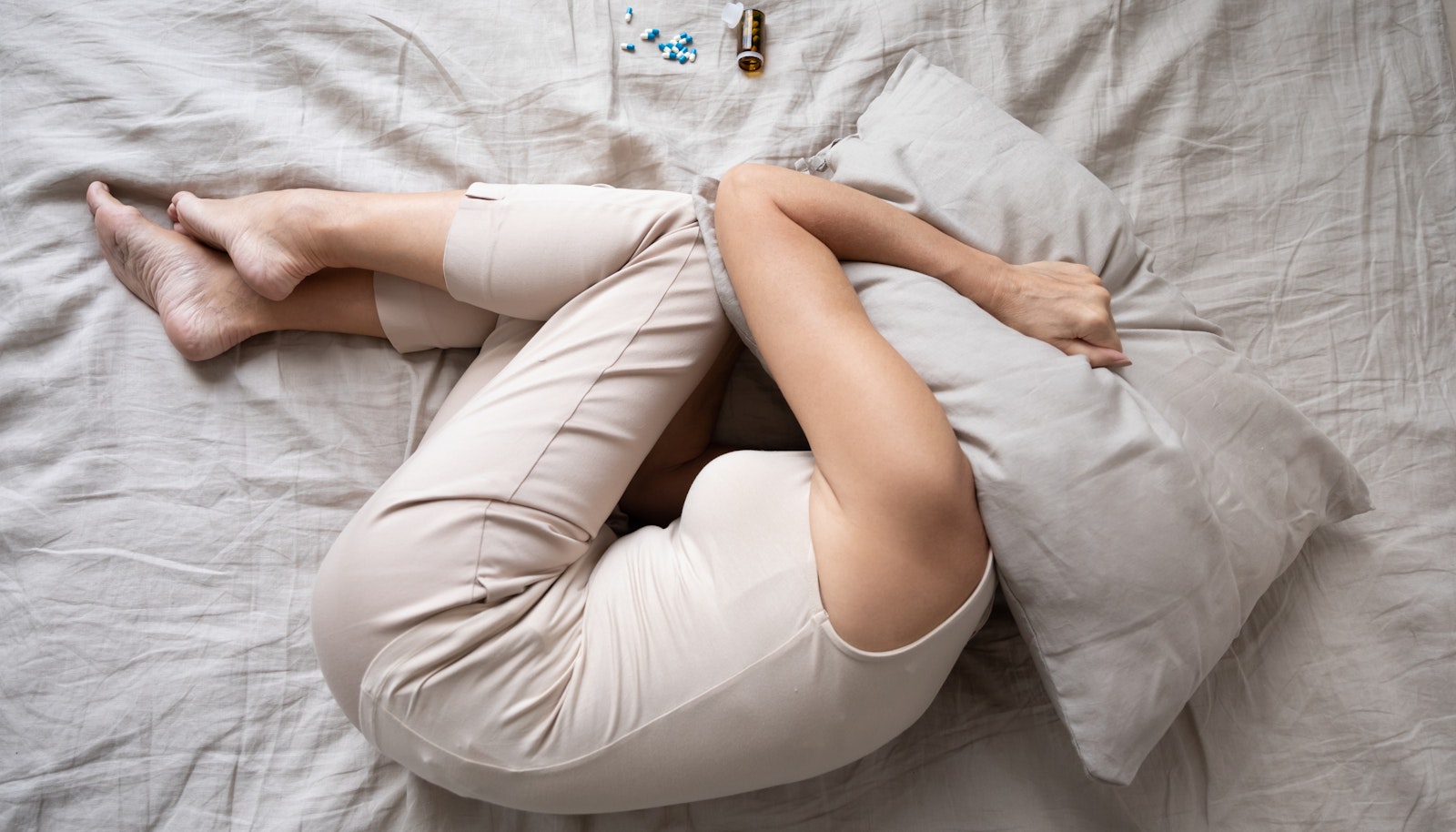